Deprecated: __autoload() is deprecated, use spl_autoload_register() instead in /nfs/c06/h01/mnt/88484/domains/nickelodeon-schoolofrock-press.com/html/_app/vendor/PHPMailer/PHPMailerAutoload.php on line 45
 Nickelodeon School of Rock Press Kit - Title Modifier 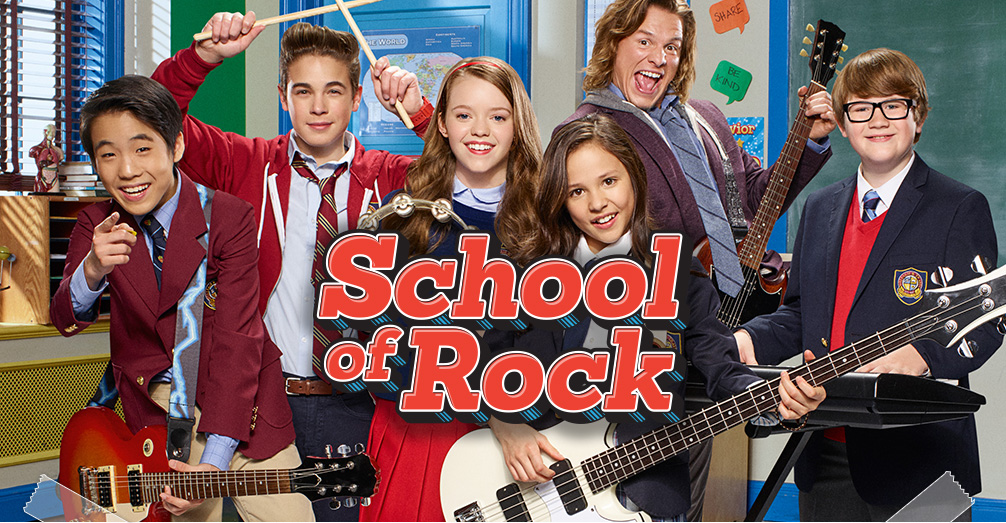 Produced with Paramount Television and Based on the Feature Film, the Comedy Series Airs Regularly on Saturdays at 8:30 P.M. (ET/PT)

Santa Monica, Calif. (Feb. 23, 2016) –  A group of overachieving prep school students band together and learn to rock out when they meet their new, unconventional substitute teacher in Nickelodeon’s highly anticipated live-action comedy series School of Rock, premiering Saturday, March 12, at 9:30 p.m. (ET/PT).  The series, produced with Paramount Television, will air regularly on Saturdays at 8:30 p.m. (ET/PT).

The series features guest appearances from Pete Wentz (Fall Out Boy), Kendall Schmidt (Big Time Rush) and Kira Kosarin (The Thundermans). Episodes will include musical performances by the cast covering hits “What I Like About You” (The Romantics),“Lips Are Movin” (Meghan Trainor), “The Kids Are All Right” (The Who), “We’re Not Gonna Take It” (Twisted Sister), “Shut Up and Dance” (WALK THE MOON), “Heart Attack” (Demi Lovato) and more.

School of Rock is developed by Jim and Steve Armogida (Crash & Bernstein, Grounded for Life), who also serve as Executive Producers with Jay Kogen (The Simpsons, Henry Danger). The 2003 movie of the same name was written by Mike White. Its director Richard Linklater and producer Scott Rudin serve as series Executive Producers, along with Eli Bush (The Newsroom, Ex Machina).

Nickelodeon, now in its 36th year, is the number-one entertainment brand for kids. It has built a diverse, global business by putting kids first in everything it does. The company includes television programming and production in the United States and around the world, plus consumer products, online, recreation, books and feature films. Nickelodeon’s U.S. television network is seen in more than 100 million households and has been the number-one-rated basic cable network for 20 consecutive years. For more information or artwork, visit http://www.nickpress.com. Nickelodeon and all related titles, characters and logos are trademarks of Viacom Inc. (NASDAQ: VIA, VIAB).